My Piano Genius piano training website
was started out of a “happy accident.” 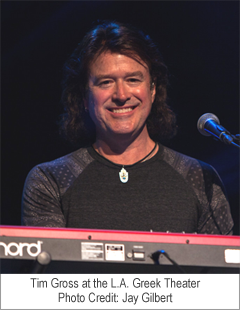 Hey there, this is Tim Gross and I’ve been playing keyboards professionally since I graduated high school (over 30 years ago) , and I’ve always had the ability to work enough to support myself financially by playing music, playing both in bands and also duos and solo “piano bars.”

I’m currently touring the country playing keyboards in Rick Springfield’s band (he wrote “Jessie’s Girl” and has had 16 other top-40 hits as well.) I’ve also played with Cheap Trick’s singer Robin Zander and will be performing with the band Berlin’s singer Terri Nunn later this year. The photo of me to the left was taken performing at the L.A. Greek Theater last week.

My point is that I’m a successful working musician, NOT a “piano teacher”, which means I approach playing piano in a very different (and more effective) way than traditional piano lessons.

A few years ago my niece (a young teenager at the time) wanted to learn to play the piano, so she started taking traditional piano lessons, which she didn’t like very much and soon quit. She then told me she was trying to learn piano by watching YouTube videos.

Out of curiosity, I searched YouTube for beginning piano video training, and was really surprised at how… horrible and confusing most of them were! Either they took forever to get to the point, or what they were saying wasn’t clear, or they were saying things that I didn’t consider to be very important.

So I decided to create my own short video showing how I and musicians I work with approach music and how we think about and talk about notes and chords. It’s much different than the way traditional piano teachers teach their students. In that video I explained the basic framework of the mechanics of working out any Major/minor chord, any Major/minor chord, and how basic chords in a song are related.

The “happy accident” part is that my first video has to date been viewed over 4 million times and is literally one of the most popular piano lessons online. Why? It stripped away all the pomp and circumstances surrounding learning the piano and quickly described the “number system” approach to understanding notes, chords, and scales.

Have you ever noticed how many musical notes all end in the vowel “E”?  That makes it confusing when you’re onstage and it’s noisy and you’re trying to call out the chords to the next song you’re about to play for another musician who doesn’t know the song:

…They all rhyme! 🙂 The poor musician trying to hear those chords is out of luck. “What??!”

That’s one of the reasons why musicians use what I call a “number system” to communicate chords and notes to each other. Here’s how it works:

In the key of “C” (which is the “default” Major key on piano because it contains all white notes), the notes are each assigned a number, like this:

There are lots and lots of “3-chord songs” like Twist & Shout, Johnny B. Goode, Great Balls Of Fire, Wild Thing, La Bamba, and literally hundreds of other songs, that use the same chords:  1, 4, 5

Without understanding those numbers that represent what the chords are, you’d be clueless about playing the same simple song in a different key.

That’s the benefit of the Number System. It lets you understand the framework that holds everything together.

My piano training approach is not without CONTROVERSY (click for more on that) but that’s what happens when you shake up the status quo. 🙂

If you haven’t checked out the 10 free videos showing more, check them out.  If you like like them, you should definitely try stepping up to a full piano training membership, because people who like it don’t just like it, they love it.

4 thoughts on “About PianoGenius.com’s piano training and the “Happy Accident” that started it all”