"Grab This Biggest Discount Ever Offered
On Our Piano Training, Proven To Improve
Your Playing In Days, Not Months."

(This discount is only valid today)

For just $5 you can get All Access to all our video training and tools for a full two weeks. You can check out everything you're going to get below, or just click the button to get started.

Through this special page you can access all 60+ Modules immediately for two weeks for just $5.

I want to make 2020 your best year ever on piano, so I'm opening up my entire vault of training for you to access right now, and if you continue on as a member you get a killer discount. 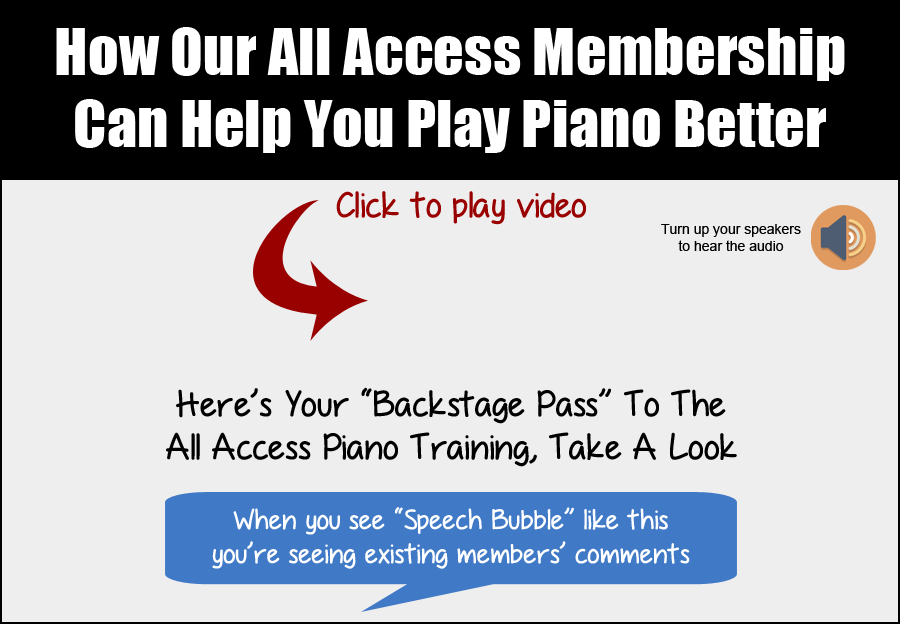 The Piano Genius training system was created by Tim Gross.

I've has been playing keyboards professionally in rock bands, in duos with guitar players, and playing solo “piano bars” for the last 30+ years. The photo on the far left was taken in the '80s at an L.A. club called Madame Wong's West. I'm currently in Rick Springfield’s band (far right photo) touring the country on a regular basis. (Rick Springfield’s biggest hit is “Jessie’s Girl”, and he’s had 16 other top-40 hit songs as well.)

I've played with 40-piece orchestras and 20+ piece jazz bands as well as solo piano bars. I've played music in paradise-like resorts and biker bars I was worried about getting stabbed in :-). I've played at large outdoor music festivals, and I've played in dives where there were only a couple of people there. I've played at drunken frat parties, and I've played "Here comes the bride" in churches at weddings. I've performed at highbrow classical music recitals playing a grand piano wearing a suit and tie, and I've had fights break out right in front of me in the middle of a song.

I'm not saying this to brag, I just want you to understand that whatever it is you want to be able to do on piano, I've probably done it and can help you. Through it all, I realized one thing: Week in and week out, 10% of what I know is what I do 90% of the time. And that's what I'm here to show you, as quickly and as simply as possible.

(Click the "X" at top-right corner to close this window)

Below are reviews and feedback that current members of Piano Genius have posted, I hope to add yours soon! 🙂

(Click the "X" at top-right corner to close this window)

I'm very happy to hear how much my training is helping existing members - that's why I'm discounting the price for you to try it yourself... You're about to get access to everything below:

This Will Kick You Into High Gear

I've been continuing to create new piano Modules for years now, and the lessons just keep getting better. From adding the "light up keys" to being able to slow down the videos as you're watching them, to improving how and what I teach based on members' feedback and requests, and more.

And remember, as an active member if you're confused about anything at all you can just ask and I'll either help you on the spot by clarifying anything you need, or if needed I'll even create new videos to make it easier to understand.

How Does This Work?

Get instant unlimited access to all streaming video training from any device that can access the Internet. (PC, Mac, Laptop, iPad, Tablet, iPhone, Smartphone) All you have to do is register and you can start watching all these piano training videos right now.

Am I Locked Into A Contract?

No, you have the full two weeks after registering to cancel or request a full refund of your $7 registration, and after that you can cancel your monthly membership dues at any time with no penalty or extra fee. There are no contracts, you can stop at any time.

Is My Registration Safe And Secure?

Absolutely. Transactions are processed through the same merchant account I've had for over 20 years through Authorizenet/1ShoppingCart or PayPal, trusted by millions of customers worldwide.

The video training is just like having me sit next to you helping you play the piano. Members keep telling me I have a knack for answering the exact questions they have, and that for the first time everything becomes clear to them.

Try It And See For Yourself

Based on current members' feedback, you'll discover that registering for your Piano Genius membership will be a huge help to you and that it'll make you very happy... I want to remove all the risk for you to see for yourself so you're getting a 2X Guarantee:

This registration discount for All Access is the biggest ever offered so don't miss out.

Register now and see for yourself, the newly added training just keeps making it better and easier to understand. -Tim

P.S. - With the thousands of Piano Genius members I've worked with in the members area I've found that there's usually a "breakthrough moment" for most people that suddenly makes everything easier and more clear for them after that.

YOUR breakthrough moment is waiting for you inside. Come on in, and I'll be there to answer any and all questions you have. In fact as an active member you can ask me as many questions as you need to and I'll be helping you personally.  I'll see you inside. 🙂   Got any questions? Let me know.

Click here only if you are not going to register

All text, code and graphics on this website are
Copyright © Educated Media LLC. - All rights reserved.